The High Line: and the Spectacular Rebirth of Public Space in New York 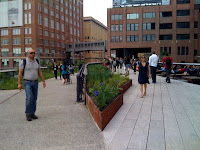 The ironic dilemma with New York City is that, even as it boasts one of the densest metropolitan populations in America, ideal public space is virtually non-existent. No grand pedestrian boulevards dissect the Cartesian grid. Only a few remarkable plazas dot the island. It’s as if the city assumed that the transplantation of a Central Park into Manhattan would provide enough public space to last the rest of the city’s history. As Manhattan has seen glamorous and self-indulgent architectural marvels rise against its fantastic horizon in recent years, the darkness these buildings cast upon the pedestrian streets seemed to signal the very disappearance of designed public space. The lack of great public space in New York appeared endemic. But then came the High Line. One of the most ambitious public projects in the modern history of New York, the High Line is a bold testament that, given the opportunity, Manhattan has the potential to create fantastic and poetic public spaces.

A horizontal beacon of life in a vertical landscape of desperation and anxiety, the High line is a spectacle for the senses. As it meanders through the urban fabric, it superimposes the existing static infrastructure with dynamic spaces for leisure. Conceived as an elevated park and designed by James Corner Field Operations with Diller Scofidio + Renfro, the High Line takes as its nucleus the abandoned elevated tracks that run from the Meatpacking District thru Chelsea and into Clinton Hill. 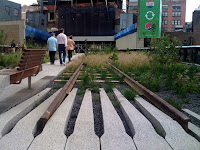 The tracks were built in the 1930s as a means to remove dangerous freight traffic from the pedestrian level. As part of the West Side Improvement project, the tracks stood lifeless since 1980. Often, the tracks acted like portals into the spectacle of the Chelsea gallery walks. The project will be completed in phases, with the next and last section to open in 2010. The idealized flow has the user exploring from South to North. At a conceptual level, this becomes a precious necklace dotted with extravagant gems, a clearly executed architectural promenade, degenerating and reintegrating along its journey and ours.

And so the journey into this densely stratified urban experience begins. Ascending into the park from the southernmost point of the project is the first of many poetic moments. The sky, along with the new Standard Hotel, is framed by the stair opening and flanked by panels of glass that retain swatches of green. A beautiful moment occurs at a certain point in the ascent, as the visitor’s eyes meet the level of the park floor, perpetually calling attention to the plantings peering through the pavers. At the top of the stairs, the visitor is released back into that city - immediately we are reminded that this project, first and foremost, is a park in a city. 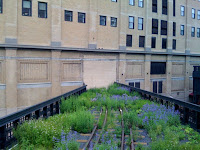 Throughout the park, a vast array of green hues subtle colors emerge from the railroad tracks. Grasses. Shrubs. Plants. Flowers. By design, the transplantations appear as if they have been growing naturally for decades; in fact, plants had already rooted themselves above the abandoned tracks and this was the source of inspiration for this landscape design. Though these new greens seem wild, upon closer inspection one notices that they are carefully curated in clusters. An orchestrated opera of textures and colors that rise above the intelligently designed pavers. Made of concrete, these pavers are wonderfully sculpted to maintain the scheme of a ribbon weaving its way through the landscape. Though the majority of the pavers are simply elongated rectangles, there are those that dive back into the tracks, bulging then tapering, easing the boundaries between walkway and plant way. Sometimes they rise and transform into playful, cascading water fountains. Other times, they emerge from the floor, mate with wood and morph into benches. These seating elements both invite and repel. They invite repose, offering a static immersion with the surroundings. Sensational views. Random aromas. Eccentric textures. In their fluid manifestations, they also repel as they promote movement, progression - becoming directive markers on a path to urban salvation, micro-beacons across the sea of concrete and grasses. 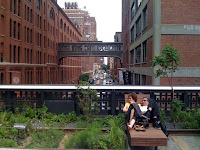 As the High Line subtly transforms as it unfolds, so do the surroundings. Historic warehouses. Glass and steel towers. Brick boxes. Extravagant perspectives. Parking lots. A river. Office windows. A hodge-podge of decent and bland architecture, the surroundings mostly sit static at the sidelines, often they recede in the distance and select few collaborate in this metropolitan experience. Indeed, the collection of buildings that line the High Line are of peculiar interest. There is Gehry and Ban and Nouvel to name a few of the most recognizable. Planned in tandem with the High line, the Standard Hotel provides the first moment of compression. Walking through this urban tunnel is sensational as these moments of imagined enclosure accentuate the experience of the promenade.

One of the most playful spaces in the project is a linear area of wooden daybeds that face toward the Hudson River. They create a space that, although in the middle of a bustling metropolis, is also calm and serene. New Yorkers have already declared this a space for reading, gawking and napping. Immediately following this space of repose is another urban tunnel. With a few tables and chairs scattered about, and a mosaic of blue and green-hued glass panels to one side, it is a strangely romantic place. With allusions to theater and ritual, it's a modern day interpretation of a classical Gothic place, stained glass window included. Further along, the visitor finds another space dedicated to the ritual of spectacle. A series of benches descend below the tracks, culminating in the spectacle on view- the street! Framed in glass, strokes of 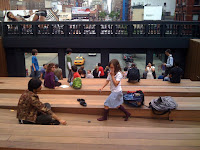 yellow cabs that disappear into the distant street were on view during one visit. At the end of the project is a set of stairs that ascend and cross over the the original railroad track edge, creating a bridge, a ceremonial platform that allows one to gaze back at this unique experience of urbanity before being released back into the street level below.

Looking back one wonders what New York would be without this vital transformation. One is reminded of the tale by Borges as told by Jean Baudrillard, of the myth where a map of the city is drawn so detailed that when it is laid on top of the actual city, it covers exactly the same area. Over time, the map withers, and the remaining pieces merge with the real. There no longer is any distinction between the map and the real and the High Line has this sort of metaphysical beauty. The distinction between what was existing and what was actually designed is indiscernible. The project seems to have grown naturally out of its own abandonment. And that vision is what makes this project so poetic. A ribbon that weaves through the urban fabric, its threads often disintegrating with actualities and its strands rethreading with illusions. The High Line is one of the most poetic and beautiful public spaces in the city’s modern history. It has given back to New York THE grand stage where New Yorkers can be…well, New Yorkers. Give us space and we will use it. Exponentially.

Anonymous said…
I enjoyed reading the post. You really made me feel the poetry. And, I agree: give us space and we will use it. Great pics, too! Can't wait to read your next post.
July 7, 2009 at 3:23 PM

Anonymous said…
Wow! Incredible piece. It is time for people to put an effort on making this great city a more enjoyable one. The need to put greenery again is important and it is nice to see there are people interesting in doing such.

Unknown said…
This is a great method of bringing green space into such a metropolitan city. New york forced green space with Central Park, but this projects integrated something that was already there. A part of New York that was not destroyed to make a green environment but integrated the past with natural growth. Can't wait to go see it and experience it for myself. Great piece.
July 9, 2009 at 10:26 AM

Lucas Gray said…
This was a fantastic article and I would like to thank Uriel Ortega our newest Talkitect contributor.