a guest post by Oliver van Poucke of Kinetic Architecture 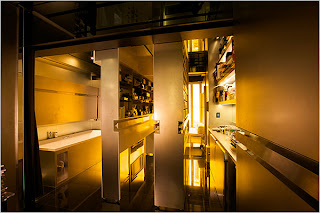 The 32m² apartment by Gary Chang can be transformed into 24 varying rooms creating a virtual 768m² apartment. Sliding walls and a "Murphy" bed are the key elements for this transformation. In his book "My 32m² Apartment - a 30 year transformation" he describes and illustrates the design process of the apartment together with his experiences inhabiting the space.

The apartment is one of 370 units in a 17-story building located in Hong Kong, China. When Gary Chang was 14 years old he moved into the seventh floor of the residential high rise. His parents, three younger sisters and incredibly - although not unusually for Hong Kong - another woman shared the 32m² small apartment. Gary Chang himself slept in the living corridor. He had to wait for everyone else to go bed. Every night he needed to transform a long bench into his temporary bed. Living in such a small space was, for Mr. Chang at that time, very interactive and creative. The sequence of transformations became a permanent act for him - an integral part of day-to-day life. He still lives in the same apartment, however the conditions have changed. He has renovated the flat four times, converting the $45,000 USD property into a luxury home worth around $1.3 million USD. In his book he divides the adaptation into these time periods: 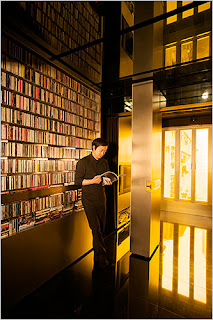 The current phase, called "Domestic Transformation," is a result of intensive study on optimizing limited space. The incredible spatial flexibility was created through moving compact elements into different arrangements. In order to plan the apartment, the elements were categorized into two widths: 550mm (work desk, wardrobe, etc.) and 900mm (toilet, laundry, bathtub...) These form two functional zones, one along each longitudinal axis of the apartment.  The central free-zone becomes the actual space for living, working, eating, resting, studying, dressing, etc. while the boundaries of these various zones become blurry and melt together. Each group of elements can then be moved as a single unit through the room, along a ceiling track system and on rollers over the reflective black granite floor. The bed hydraulically folds down from the wall conserving space during the day. As the elements are moved around and arranged in different configurations the apartment is able to accommodate a seemingly endless amount of activities.

"Soon enough, having worked up an appetite, he was ready to move on. He used a remote control to raise the screen, revealing a large yellow-tinted window behind it, filling the room with radiance... He grabbed a handle near the wall-mounted television, pulling a section of the wall itself toward the center of the room. Behind it, a small countertop with two burners, a sink and a spice rack appeared. Opposite the countertop, on the back of the now-displaced wall, he lowered a hinged worktop made of a lightweight laminate of honeycombed aluminum. Suddenly, he was standing in a kitchen."  (from the New York Times) 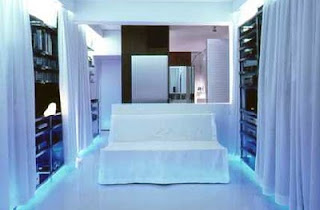 Gary Chang based his design on the need for extensive and rapid transformation. This need was driven by the wish to realize his desires of having a guest room, a home spa, walk-in closet or to lie in a hammock and screen movies. He hopes that some of his home’s innovations might be replicated to help improve domestic life throughout Hong Kong, an overcrowded city with typically tiny apartments. By adapting a small space to accomodate many functions it gives people an affordable way to have a flexible living environment. 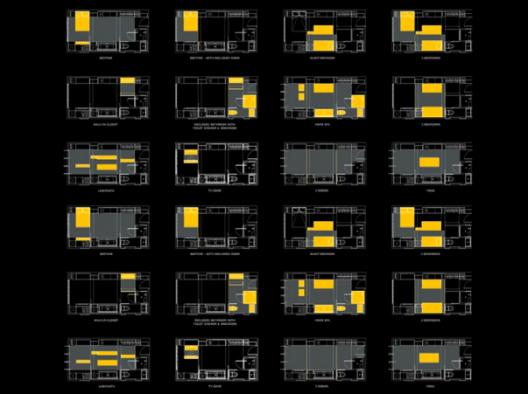 Stefano said…
I agree. Art and Architecture indeed does go well with one another. A very artistic sense of construction fetches a good price.
makati condos
July 19, 2011 at 10:54 PM

new homes for sale connecticut said…
The designs looks amazing, thank you for sharing these pictures.
December 6, 2011 at 8:48 PM

adjustable wedge inserts said…
Modern building are now build to withstand wear and tear from day to day, it looks gorgeous by the way. Thanks.
March 4, 2012 at 5:34 PM

houses for rent in northern kentucky said…
Thank you very much for sharing this, the design of the apartment is marvelous and this is one of the first things I look at when looking for a place to rent.
March 26, 2012 at 6:27 PM

Valerie Phillips said…
Gary Chang is one of the best contemporary modern designer. He's ideas are so unique and edgy. I love how he translate them into reality and creates an impeccable space like nobody does. He's awesome.

Debra Mennins said…
This is the room of the future. There are a lot of other places that have this kind of design philosophy. The spaces are modular and it can fit into the daily needs of the person living there.