text and images by Pierce Atkinson

While living in Montreal for the last 6 years, I have seen a lot of change and development. Among all of it, "Le Quartier des Spectacles" is a new development that I love! After having opened it's second phase in 2010, the area is currently being used as an outdoor art gallery, a festival venue and a promenade for locals and visitors in the summer months. 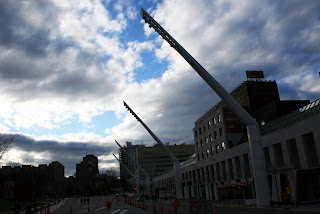 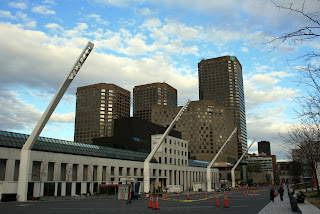 The project broke ground in 2008 as part of the city's attempt to bring life back to an area of Montreal that was beginning to be forgotten. The neighbourhood is home to Montreal's Contemporary Art Museum and is surrounded by "Theatre Maisonneuve" and "Salle Wilfred-Pelletier". With such great 'bones' already, the city found it necessary to revive this area of the city with a fresh look and a versatile remodel. 1. The first part of the project added was "Place des Festivals". The public square underwent some serious construction from it's original use as a parking lot and side street. The excavation of 50,000 tonnes of earth was a must to form a gradual slope down to Rue Jeanne-Mance, softening the look and accessibility of the area. Once the parking lot was removed and leveled an underground service room was added for the maintenance of fountains scattered throughout the square. The reconfiguration not only allows but encourages bike use and walking paths. Rue Jeanne-Mance was re-worked from five lanes to three lanes and a new no street parking rule was implemented, eliminating congestion and encouraging pedestrians and bikers. On top of these large scaled reconfigurations "Le Quartier des Spectacles" added what they call two 'Living Showcases' to the 6,141 m² public square. The "Living Showcases" are one story structures located on the sidewalk extension of Rue Jeanne-Mance. These structures are now home to two restaurants in the square. The glass and aluminum used blend with the neighbourhood to make it clear they are part of "Le Quartier des Spectacles". Profits from the rental of the spaces are then put back into cultural events held at the "Place des Festivals" 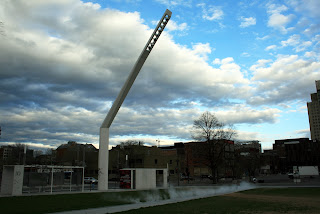 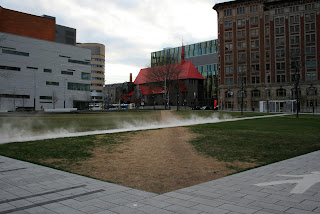 2. The second part of the project added was "Le Parterre" and the "Promenade des Artistes". A continuation of the "Place des Festivals", "Le Parterre" opened in May of 2010 and is a 3,455 m² extension of the public square mentioned above. Though smaller, the area acts as a second stage during festivals and concerts. The construction involved some major reconfiguration of a main street, de Maisonneuve, and redirecting other smaller streets. Eleven event kiosks were built along both "Le Parterre" and "Promenade des Artistes". These kiosks are convenient removable 9m x 3m x 3m structures equipped with water, electricity and multumedia services. They allow organizers to set up informations, sales and service booths quickly and effeciently. These kiosks can also be used as a showcase for short term or long term artwork. Again the white aluminum and concrete used for these structures repeat throughout the neighbourhood making it clear that these are part of "Le Quartier des Spectacles".

This neighbourhood is fairly active year round but definitely comes alive in the summer. We have amazing Jazz festivals and great Film Festivals held at these venues each year. This was definitely a must in terms of revitilizing the neighbourhood. 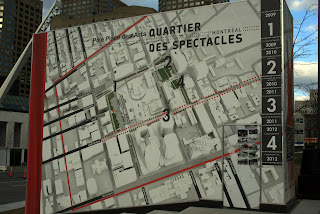 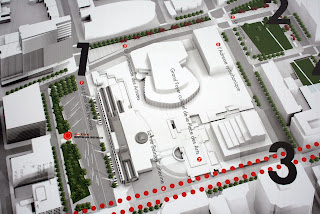