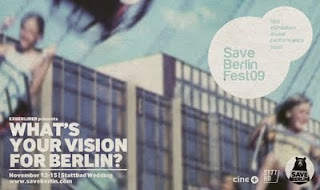 Save Berlin is a project aiming to catalog and present ideas about the urban condition of Berlin. To combat unwanted and misguided change, this forum gives everyone a voice in the development of our beloved city.

What is your vision for Berlin?

Berlin is changing. The city's leaders have plans for a sanitized Euro-capital. They're replacing the city's history and character with shopping malls and luxury condos. Their ideas for 21st Century Berlin landmarks: a fake Baroque palace and a copy of London's giant Ferris wheel. Berlin is a city of daring artists and irreverent dreamers.

Save Berlin 09 (November 13-15, 2009) taps into Berliners' enormous resource of imagination, asking for new visionary schemes for Berlin, to inspire debate and build a vision for the city's future. Come join the conversation, and let's show we can do better!

1. Berlin in 2009 is a fascinating city. It has everything - a vibrant youth culture, high art, generous infrastructure and cheap rent. It's an island of affordable civilization for outcasts and dreamers. Berlin welcomes Turks and Jews, artists and families, punks and bureaucrats, sexual outlaws and party kids. Its dark past and deep scars are integral to its character and appeal. The cityscape reflects its tumultuous past and heterogeneous present.

2. Berlin is in danger. Creeping gentrification is pushing up rents and killing the vibrant mix of cultures, demographics and architecture. Shopping malls, glass towers and unimaginative historical replicas are filling up the gaps in the cityscape, pushing towards a generic uniformity. History is being selectively wiped away or sanitized beyond recognition.

3. The wrong people are making decisions about Berlin's future. Businessmen and bureaucrats strive to upgrade the city into a bland European capital. This isn't what most Berliners envision their city should become.

4. All Berliners deserve a say in their city's future. Foreigners who have chosen to live in this city are inspired by its spirit, history and mythology. They sense what makes Berlin unique. They not only know what should be preserved and cultivated, but can also contribute creative ideas for the future.

5. Save Berlin is a movement that will launch with a three-day event at Stattbad Wedding. From November 13-15, 2009, dozens of architects, artists, performers, musicians and other imaginative Berliners will present their ideas and visions. They'll be revisiting the past, challenging the present and showing their alternatives for the future - in the form of concrete proposals and artistic works. The exhibition will show drawings, models, photographs and installations of the people's vision for 21st Century Berlin, while each night we'll also have a varied program of performances, films, music and discussions.