Italian designer Andrea Salvini, based in New York City, has focused his work on eco-responsible residential architecture since 2008, when he caused a stir in the blogosphere with his Modern Cabin and Trilogy of Fire Island Homes -- both an attempt to re-imagine and reinvigorate the moribund American vacation home tradition for the eco-conscious age. Now he has turned his attention back to his homeland, this time with a mixed-use, green housing project near Caserta, in southern Italy, which he calls The Sustainable Neighborhood.

Consisting of 13, five-floor apartment buildings spread over 12 acres, the development reflects the needs of a tightly knit community where environmental regulations are becoming increasingly strict. These kinds of strictures, Andrea explains, often result in more innovative design practices, where more has to be done with less, yet at the same time the mandate is to somehow improve its inhabitants' comfort and standard of living.

Andrea achieves this through a variety of architectural details. Paramount were the importance of balconies for all units. Both front and rear facades of the building are articulated in a grid of large balconies where sunlight is regulated by adjustable, brise-soleil sliding panels, or louvers. As each resident adjusts his own brise-soleil in response to light needs or preference, the result is a continuously changing, random pattern on the facade. Sunlight control is an important feature for residential architecture in southern Italy in particular, where summer temperatures can be sweltering.

Continuous glass surfaces wrap the perimeters of the entire ground (commercial) floors, emphasizing the suspended effect of the buildings, which is supported by pilotis. This suspension design creates recessed porticoes as a sheltered gathering place for the residents and the surrounding community – recalling a traditional feature of Italian architecture. The glass surface is visually interrupted by the stark element of a sculptural, metal folding screen that at night – after business hours – encloses its perimeter for security.

Vertical gardens, conceived as an abstract extension of the surrounding greenspaces, would enliven the sides of each building with an unbroken expanse of a variety of plants, such as ivy, creepers and grasses.

Other key features include:

One such detail is a system of light panels (attached perpendicularly to the facades) which change pattern in the facades and illuminate at night through solar power, creating a dramatic, rhythmic visual effect in the darkness.

The overall effect of The Sustainable Neighborhood, one of lightness, community, natural harmony and a dignified note of privacy, is notable for its break from traditional, middle-income housing projects for these very qualities. You can read more about The Sustainable Neighborhood, as well as Andrea's other projects, at: http://sites.google.com/site/salviniarchitect/. 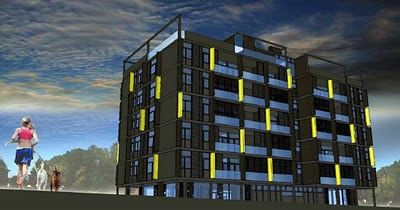 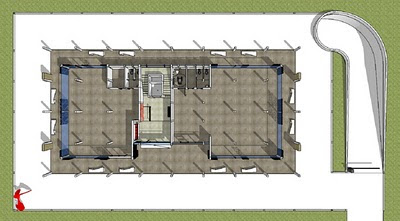