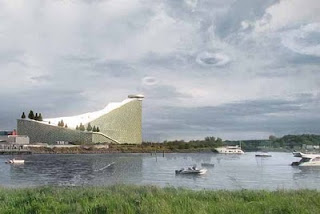 BIG + realities:united + AKT + Topotek 1 & Man Made Land has been selected to design the new Waste-to-Energy Plant that doubles as a ski slope for Copenhagen’s citizens and its many visitors. Construction is planned to be completed by 2016.

Located in an industrial area near the city center the new Waste-to-Energy plant will be an exemplary model in the field of waste management and energy production, as well as an architectural landmark in the cityscape of Copenhagen. The project is the single largest environmental initiative in Denmark with a budget of 3,5 Billion DKK, and replaces the adjacent 40 year old Amagerforbraending plant, integrating the latest technologies in waste treatment and environmental performance. The shortlisted offices included Wilkinson Eyre Architects, Dominique Perrault Architecture, 3xN, Lundgaard & Tranberg Architects & Gottlieb Paludan Architects who were selected to compete out of 36 international proposals in Fall 2010. The winning team was announced by an unanimous judge panel.

”BIG’s proposal contributes to the city with something useful and beautiful. We see this creating a lot of opportunities and with this unique building, we can brand the Danish knowledge and technology to show the world our abilities within environmental and energy issues”
- Ulla Röttger, Director of Amagerforbraending.

Instead of considering the new Amagerforbraending as an isolated architectural object, the building is conceived as a destination in itself, reflecting the progressive vision of a new type of waste treatment facility. The roof of the new Amagerforbraending is turned into a 31.000 m2 ski slope of varying skill levels for the citizens of Copenhagen, its neighboring municipalities and visitors, mobilizing the architecture and redefining the relationship between the waste plant and the city by expanding the existing recreational activities in the surrounding area into a new breed of waste-to-energy plant.

“The new plant is an example of what we at BIG call Hedonistic Sustainability – the idea that sustainability is not a burden, but that a sustainable city in fact can improve our quality of life. The Waste-to-Energy plant with a ski slope is the best example of a city and a building which is both ecologically, economically and socially sustainable”, Bjarke Ingels Founder and Partner, BIG. 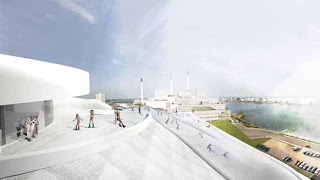 The slope is ecological using a recycled synthetic granular, upending the convention of the energy intensive indoor ski resort. Access to the slopes is via an elevator along the plant’s smokestack providing views into the plant, giving glimpses of its internal workings finally reaching an observation platform 100m above giving sightseers an unobstructed view from one of the tallest structures in Copenhagen. All of this while the smokestack is modified to puff smoke rings of 30m in diameter whenever 1 ton of fossil CO2 is released. These smoke rings which are the brainchild of Germany-based art studio realities:united will form due to the condensation of water in the flue gases as they as they slowly rise and cool, serving as a gentle reminder of the impact of consumption and a measuring stick that will allow the common Copenhagener to grasp the CO2 emission in a straightforward way - turning the smokestack traditionally the symbol of the industrial era into a symbol for the future. At night, heat tracking lights are used to position lasers on the smoke rings into glowing artworks. 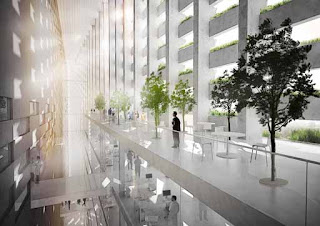 “Designing a façade for a building is like wrapping a gift without having to consider its content. Instead of concentrating on the wrapping paper we have instead invested our energy on creating a gift for the citizens of Copenhagen & its visitors no matter if they are adults or children, professionals or beginners. I can’t wait to ski on a base of clean and green energy with a view over the city in 2016”, David Zahle, Partner & Project Leader, BIG.

From a distance, the entire building is wrapped in a vertical green façade formed by planter modules stacked like bricks turning it into a mountain from afar. The surrounding topography is sculpted by Topotek 1 & Man Made Land to form a park which offers informal sport activities in summer and winter. Along its western border a field of hills will mimic a mogul piste. A path system throughout the park interconnects the whole site and creates good connections to the neighboring residential area. 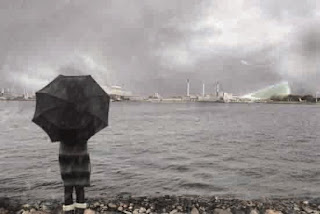