Crafting iconic monumental buildings is no easy task - architects and funders go to great lengths to develop the new Gherkin, Shard or Eiffel Tower - but what about all the buildings that didn’t quite make it? Some incredible designs have been crafted throughout history that failed to be realized for many reasons.

The Great architect Christopher Wren, once said ‘Architecture aims at Eternity’. But sadly, these five potentially fabulous buildings missed their shot at the blue moon.

1. Tatlin’s Tower  
Tatlin’s Tower was the brain child of Russian artist and architect Vladimir Tatlin. It was meant to be a towering tribute to both Tatlin himself and modern architecture. The plans show that it would be much larger than France’s Eiffel tower and would have been the tallest structure in the world at the time of completion. The building would have used rotating parts and a large projector on the roof to project messages onto the sky. This tower could have been awe-inspiring, but alas, it couldn’t realistically be built or funded. Russia was having a rough ride financially at the time so it was impractical to spend lots of government money on a structure that required such a huge amount of steel, especially when there were concerns that it may not even architecturally work. However, it’s the sheer scope, ambition and architectural revolution it would have represented that lands the tower a place in this list.

2. McCaig’s Tower  
McCaig’s tower overlooks Oban in Argyll, Scotland. The main aim of the tower was to create a lasting monument to architect John McCaig’s family. The coliseum cost the grand total of five thousand pounds in 1897 and remains unfinished. McCaig was going to fill the building with statues of himself and his family, but it was his untimely death that stopped the project from continuing. Despite him leaving money and strict instructions to have the tower completed, his sister went against his wishes, causing much relief from the local people because McCaig planned to forbid public access. This pure vanity project will almost certainly remain half finished forever, and currently acts as a garden... for the public. 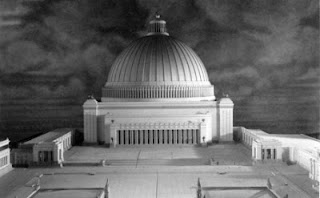 3. The Volkshalle  
The Volkshalle (“People’s Hall”) would have been a monumental building in Berlin, Germany. Planned by Adolf Hitler and his architect Albert Speer, the aim of the building was to create a breath-taking centre piece for the country’s capital. Planned models showed the great scale that the building would have taken. There are also images showing that the Nazi eagle figure on a pedestal would be included in the heart of the building. Rumour has it that at a certain time of year, when the light fell right, the eagle and pedestal would cast a shadow of Hitler’s face. Terrifying. The great domed building never entered construction following the outbreak of the war.

5. Plaza Rakyat  
Based in Kuala Lumpur in the heart of Malaysia, this building was started in the 1990s but is still unfinished. Again, financial crisis for the developer has been the cause for stalling of the project. The building, designed by American architectural firm Skidmore, Owings and Merrill, remains half-baked with concrete, fascia and steel structuring hanging in the wings of the Malaysian capital. This building was meant to be a 79-storey office tower with a 46-storey condominium, a 24-storey hotel and a seven-storey shopping centre.  Who knows what will happen in the future with this one. It’s still officially on hold and has been since 1997.

The sheer number of unfinished buildings across the globe is huge. A range of reasons can halt construction, from natural disasters to financial problems, architect death to planning issues. If you think you know of an unbuilt building that should be on this list – let us know in the comments below...

This guest post was written by Louise Blake, a writer with a passion for architecture and design, who blogs for Eurocell.
Email Post