While Car Free Streets Proliferate Around the World, Portland Doubles Down on Highways 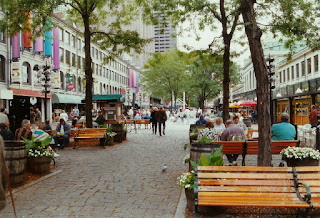 While cities struggle to maintain balanced budgets, provide basic services to their citizens, keep housing affordable, and address climate change, one of their most valuable resources is being squandered - land. As Cities grow and become more dense there is less and less logic in giving so much of our land away solely for the use of cars. It doesn't make functional or financial sense. Land values just don't justify allocating such a large percentage of our urban land to roads, while space for pedestrians and other means of transportation are given slivers of space. By squandering so much land, and thus subsidizing driving, cities are missing out on utilizing this asset for the public good. Reclaiming this underutilized space can create incredible value, address climate change, and make cities more enjoyable and livable. Redesigning roads for multiple uses, creating car-free zones, and giving space back to people will only make cities better and more enjoyable. Over the next decade this will be a growing trend in urban design, as more and more cities realize they need to rethink how they allocate their limited land resources.


Cities have limited space, and how it is allocated is tremendously important for people. The denser a place, the dearer each square foot is. Yet all over the world, cities were retrofitted to accommodate cars, giving them an outsized portion of urban space and limiting the area in which people could walk, sit at cafes, or play games with friends.


One of the interesting things that is causing planners to rethink how we allocate limited street space is the rise of micro-mobility and the sharing economy. With bike share, electric scooters, ride share, expanding public transit systems, and other ways of navigating the city reliance on cars and the space dedicated to them is not needed as it once was. I love seeing so many cities around the world starting the transform spaces once dedicated to cars, back into places dedicated to pedestrians, and other transit options. From the redesign of Times Square in NYC and the traffic-free zone in Madrid, to the current plan to make Market St in San Francisco pedestrian only, it is great to see cities around the world following this growing trend.

My only complaint is that a city like Portland, who prides itself on and markets its image as a sustainable city with progressive planning, is taking the opposite approach. Rather than investing in public transit and bike infrastructure, and finding ways to reduce reliance on cars and rededicating street space for pedestrians, they are doubling down on roads with the State about to invest over $500,000,000 on an expanded freeway through the city center. What a waste.