Here is a press release I recently received from MVRDV for their new project in downtown Rotterdam:

Today the mayor of Rotterdam, Ahmed Aboutaleb and city councilor Hamit Karakus have officially started the construction of the new Rotterdam Market Hall. The arched building located in the centre of Rotterdam, developed by Provast and designed by MVRDV is a hybrid of public market and apartment building. Completion is set for 2014. Total investment is 175 million Euro with a total surface of 100.000 m2.

At the place where Rotterdam was founded, near the historic Laurens church, the Market Hall will be realized as a new urban typology. The Market Hall is a sustainable combination of food, leisure, living and parking. Fully integrated to enhance and use the synergetic possibilities of the different functions, a public building emerging from housing. 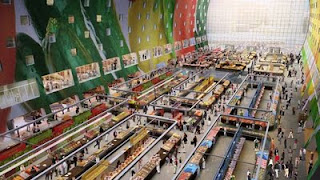 An arch of 228 apartments, of which 102 for rent, will create a large hall which houses 100 market stalls, shops and restaurants, 1200 parking spaces and an underground super market. The apartments will all have a balcony on the outside and a window to the inside of the market. Insulation will prevent any unwanted effects. The 40 meter tall and wide opening of the front and back will be covered with a flexible suspended glass façade, allowing for maximum transparency and a minimum of structure. The interior of the arch will display market produce.

The project with a total of 100.000 m2 is set to be completed in 2014 and part of the current regeneration of Rotterdam’s post war centre. Project developer Provast realizes the building, Unibail Rodamco invested in the shops and restaurants whilst Housing Corporation Vesteda will manage the rental apartments, making the building a socially integrated part of the city.

My thoughts: It is definitely a bold statement and an ambitious design. However, I don't find it particularly captivating. It seems rather large and bulky and definitely doesn't slip into its surroundings - rather, it screams for attention. The market space seems inviting with the minimal glass walls separating it from the elements while preserving views and allowing ample daylight. It is also interesting that all of the apartments will have views both out to the city and in to the market. I just don't think this building needs to be so flashy. Giant fruits and vegetables as super graphics on the interior of the arch? Do they really have to hit us over the head with the graphic design? I would much prefer a simpler material palate, one with high quality materials and an acute attention to detailing - something less flashy and more subdued and confident. I would have liked to see a building that creates a new typology for mixed use architecture and yet elegantly fits within the context of the historic city.

* Update from Irold van der Sar, a friend and architect living in Rotterdam: The development of the Markthal is really not sure. See: http://www.vastgoedjournaal.nl/index.php/news/760/16/Provast-dagvaardt-Vesteda-opnieuw Briefly: the developer is taking Vestada to court. Vestada doesn’t have faith in the project anymore now that one of the other investors stepped out of the project.

Firm Profile:
MVRDV was set up in Rotterdam (the Netherlands) in 1993 by Winy Maas, Jacob van Rijs and Nathalie de Vries.

MVRDV produces designs and studies in the fields of architecture, urbanism and landscape design. Early projects such as the headquarters for the Dutch Public Broadcaster VPRO and housing for elderly WoZoCo in Amsterdam lead to international acclaim. MVRDV develops its work in a conceptual way, the changing condition is visualised and discussed through designs, sometimes literally through the design and construction of a diagram.

The office continues to pursue its fascination and methodical research on density using a method of shaping space through complex amounts of data that accompany contemporary building and design processes. MVRDV first published a cross section of these study results in FARMAX (1998), followed by a.o. MetaCity/Datatown (1999), Costa Iberica (2000), Regionmaker (2002), 5 Minutes City (2003), KM3 (2005), which contains Pig City and more recently Spacefighter (2007) and Skycar City (2007), the latter two will be exhibited at the 2008 Biennale of Venice. MVRDV deals with global ecological issues in large scale studies like Pig City as well as in small scale solutions for flooded areas of New Orleans.

Current projects include various housing projects in the Netherlands, Spain, China, France, Austria, the United Kingdom, USA, India, Korea and other countries, a television centre in Zürich, a public library for Spijkenisse (Netherlands), a central market hall for Rotterdam, a culture plaza in Nanjing, China, large scale urban masterplans in Oslo, Norway and in Tirana, Albania, a masterplan for an eco-city in Logroño, Spain and an urban vision for the doubling in size of Almere, Netherlands.

The work of MVRDV is exhibited and published world wide and receives international awards. The 60 architects, designers and staff members conceive projects in a multi-disciplinary collaborative design process and apply highest technological and sustainable standards.

If you are interested in the work of MVRDV and want to see more of their research and built projects check out these books: Mvrdv: Km3: Excursions on Capacity,