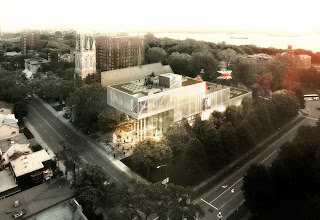 The Office for Metropolitan Architecture (OMA), has won the competition for a major expansion to the Musée National des Beaux-arts du Québec (MNBAQ). The 12,000m2 new building, a cascade of three overlapping boxes at the juncture of downtown Quebec City and the historic Battlefields Park, will be OMA’s first built project in Canada. 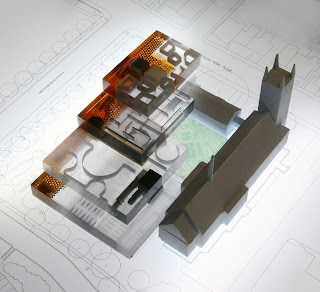 OMA’s expansion of MNBAQ – linked underground with the museum’s three existing buildings – is located on Quebec’s main promenade, Grande-Allée, adjacent to St. Dominique Church. The design aims to integrate the building with the surrounding park and initiate new links with the city. Three stacked galleries of decreasing size – housing contemporary exhibitions (50m x 50m), the permanent contemporary collection (45m x 35m) and design / Inuit exhibits (42.5m x 25m) – ascend from the park towards the city, forming a dramatic cantilever towards the Grande-Allée and a 14m-high Grand Hall, welcoming the public into the new building.

Shohei Shigematsu commented: “Our ambition is to create a dramatic new presence for the city, while maintaining a respectful, even stealthy approach to the museum’s neighbors and the existing museum. The resulting form of cascading gallery boxes enhances the museum experience by creating a clarity in circulation and curation while allowing abundant natural light into the galleries.” 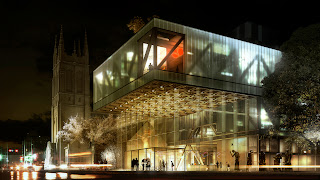 The project will be executed by OMA’s New York office in collaboration with Provencher Roy + Associés Architectes, with an anticipated completion date of fall 2013.