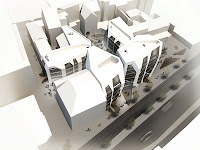 A ceremony on April 16 marked the official groundbreaking of "Sonnenhof", a landmark development consisting of four new office and apartment buildings extending over several allotments in the historic center of Jena, Germany. Spanning over approximately half of the lot, the four-building complex leaves a large part of the space open for public use during the day, permitting a free flow of pedestrian traffic across the area. The buildings, situated on the edges of the lot, frame a small, urban courtyard typical to medieval city structures. Passages between the individual buildings connect them to the surrounding public-use areas, making it an important junction in the urban network. The mixed-use concept supporting a small scale, flexible use scenario facilitates a seamless integration into the existing urban fabric, while the design of the outer buildings takes up the geometry of the polygonal shapes in the facade, continuing their graphics across the floor. The resulting surfaces are often extended and "programmed" into the third dimension, forming a sculptural set of wedges and steles integrating such functional elements as flower beds, ventilation openings, seating and lighting fixtures and thus transforming the open areas into attractive, urban leisure spaces. 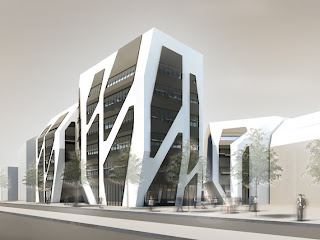 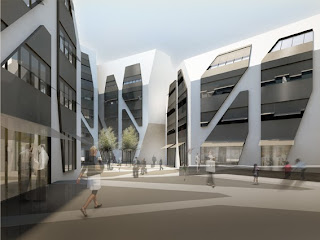