Book: The Green Dream, How future cities can outsmart nature - The Why Factory 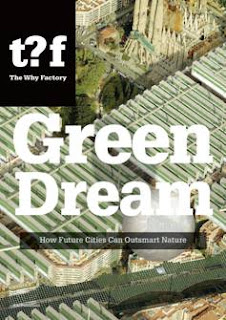 (Delft 26th of May 2010) The Why Factory and NAi Publishers present the research project Green Dream, a comprehensive analysis of the current state of the debate and practice of sustainability and all related topics. The Green Dream is a comprehensive publication about the sense and nonsense of a subject which concerns us all and is often abused or misunderstood whilst being put into general practice. In 22 critical observations the book analyzes in a broad way the issue and point towards solutions for a new approach.

Everybody is talking about Green these days; sustainable architecture and urbanism are getting almost universal attention. And they deserve it. Who could possibly oppose Green?

But there is also suspicion around Green. Research is contradictory. Conclusions are ambiguous. Born-again sustainability gurus are appearing out of nowhere, advocating new truths. Politicians and developers misuse ecology to promote their own agendas. Green-washing has become the state-of-the-art marketing tool.

The Green Dream makes a series of alarming and sometimes contradictory observations on today’s state of the sustainability debate, theory and practice. It explores the topic in an analytical, yet experimental way. It encourages to look at Green from a wider perspective, to stimulate the discussion around Green and to speculate on a new green future.

One of the twenty-two critical observations that Green Dream makes about the current state of environmentally sustainable practice, is the tendency to focus on ‘small green deeds’. The interventions are too small and are too often disconnected efforts to attain the scale of and impact that is called for. Another observation is that Green progresses too slow; the pace with which research and innovation is implemented falls way behind the speed that is needed to keep up with the effects of the ecological crisis.

The Why Factory concludes that green is ultimately about performance. A calculator is proposed, which can measure how Green cities are, which makes their efforts in the field of sustainability comparable and ultimately effective. Visionary projects illustrate the green future that contextual, large-scale, imaginative and measurable architectural and urban projects might produce.

The Why Factory is a new global think-tank and research institute, led by Winy Maas/MVRDV and Delft University of Technology. The Why Factory advocates the necessity of research, theorization and politicization with regard to the urban future as the territory proper of architecture. The Why Factory initiates independent research projects, post-doctoral programmes, studios for MA courses in architecture and urbanism, post-doctoral studios at the Berlage Institute in Rotterdam, master classes, workshops, debates and round-table discussions.

The Why Factory explores the possibilities for the future development of our cities, focusing on the production of models and visualizations for cities of the future. The Why Factory confronts our world’s existing reality with the future of the city. The results of this research are being presented in a series of books, the ‘Future Cities Series’, which is being published in association with NAi Publishers in Rotterdam and Thonik/ BENG Graphic Designers in Amsterdam, and in films produced in collaboration with Wieland & Gouwens in Rotterdam and the BBC in London. The studies will be presented on television by the VPRO public broadcasting company and will be shown at the various exhibition venues (the Netherlands Architecture Institute, the Hong Kong Design Institute and the Aedes Gallery in Berlin).