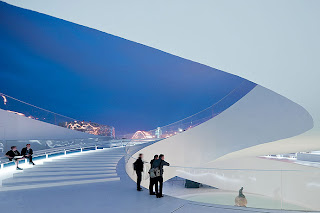 The Danish Pavilion at Shanghai’s World Expo 2010 designed by BIG-Bjarke Ingels Group opened to the public recently. The Danish pavilion at EXPO 2010 will give visitors the opportunity to try some of the best aspects of Danish city life themselves. Through interaction, the visitors are able to actually experience some of Copenhagen’s best attractions – the city bike, the harbor bath, playground settings, a picnic on the roof garden and the opportunity to see the authentic H.C Andersen’s Little Mermaid.


“When we visited the World Exhibition in Zaragoza, we were stunned by the artificial content. State propaganda in paper maché. The Danish Expo pavilion 2010 is the real deal, and not just endless talking. You can ride the city bike, take a swim in the harbor bath, and see the real Little Mermaid”
- Founder of BIG, Bjarke Ingels

The pavilion is designed as a traffic loop created by the motion of city bikes and pedestrians tied in a knot. Over 300 free city bikes located upon the roofscape, offer the visitors a chance to experience the Danish urban lifestyle which includes biking everywhere. The loops are connected in two places. Coming from the inside, the visitors can move out onto the roof, pick up a bike and re‐visit the exhibition by bike as the outdoor cycle path slips into the interior and runs along the entire exhibition before exiting onto the EXPO grounds. The sequence of events at the exhibition takes place between two parallel facades – the internal and external. The internal is closed and contains different functions of the pavilion. The width varies and is defined by the programme of the inner space. The pavilion’s external façade is made of perforated steel. In the evening time, the façade becomes a sequenced instrument of interactive light illuminating the passers‐by.

The exhibition can be experienced in two speeds, as a calm stroll with time to absorb the surroundings and as a dynamic bicycle trip, where the city and city life rush past. Like a Danish city, the Danish pavilion is best experienced on foot and by bike. This way, the pavilion’s theme Welfairytales (Welfare + Fairytales) re‐launches the bicycle in Shanghai as a symbol of lifestyle and sustainable urban development. When the Expo closes, the pavilion can be moved to another site in Shanghai and could function as a transfer point for Shanghai’s new city bikes.


"Sustainability is often misunderstood as the neo-protestant notion "that it has to hurt in order to do good". "You're not supposed to take long warm showers - because wasting all that water it’s not good for the environment" or "you're not supposed to fly on holidays - cause airtraffic is bad for the environment". Gradually we all get the feeling that sustainable life simply is less fun than normal life. If sustainable designs are to become competitive it can not be for purely moral or political reasons - they have to be more attractive and desirable than the non-sustainable alternative. With the Danish Pavilion we have attempted to consolidate a handful of real experiences of how a sustainable city - such as Copenhagen - can in fact increase the quality of life"

The pavilion is a monolithic structure in white painted steel which keeps it cool during the Shanghai summer sun due to its heat‐reflecting characteristics. The roof is covered with a light blue surfacing texture, known from Danish cycle paths. Inside, the floor is covered with light epoxy and also features the blue cycle path where the bikes pass through the building. The steel of the facade is perforated in a pattern that reflects the actual structural stresses that the pavilion is experiencing making it a 1:1 stress test. The blue cycle path and white concrete surfaces will further define the arrival and exit areas.

Sitting in the harbor pool at the centre of the pavilion is the real Little Mermaid from the harbor of Copenhagen. As one of three of H.C. Andersen’s fables, who is affectionally known in China as An Tung Shung, which is read by every child in China, this will be seen as a gesture of cultural generosity between Denmark and China. While the mermaid is in Shanghai her place in Copenhagen will be replaced by Ai Wei Wei’s multimedia artwork, including a live broadcast of the statue in Shanghai. Other artists include Jeppe Hein from Denmark, who designed a ‘social bench’ that will run alongside the bicycle lane and adapts to its environment elastically by incorporating different functions including a bar for food and drink. The works of Martin De Thurah and Peter Funch are also included in the exhibition areas.


“Throughout the design and realization of the Danish Pavilion a wide range of disciplines, such as architecture, engineering, lighting design and art installations meld together to create a single structure that plays like a finely tuned instrument”
-Project Leader of Danish Expo Pavilion 2010 and Partner in BIG, Finn Norkjaer

About BIG – Bjarke Ingels Group:
BIG currently comprises a group of architects, designers, and thinkers operating within the fields of architecture, urbanism, research, and development which are comprised of over 20 nationalities. The office is currently involved in a large number of projects throughout Europe, Asia and North America. BIG’s architecture emerges out of a careful analysis of how contemporary life constantly evolves and changes, not least due to the influence of multicultural exchange, global economic flows and communication technologies that together require new ways of architectural and urban organization. In all our actions we try to move the focus from the little details to the BIG picture. 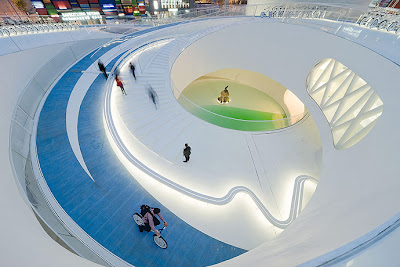 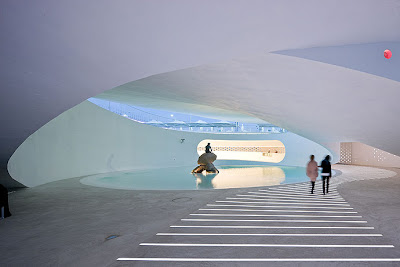 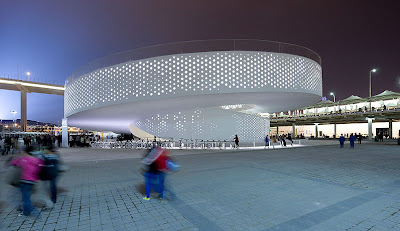