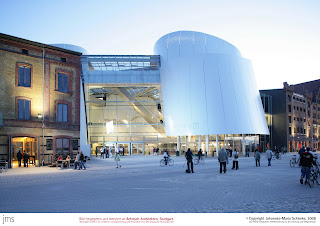 A few weeks ago I visited the Ozeaneum in Stralsund, Germany - a couple hours train ride from Berlin. It was actually a recommendation to visit the city of Stralsund that prompted the trip yet the rainy weather lead us to search out indoor activities. Tucked away on the harbor front between old brick warehouses and boats selling various friend fish was this twisting, flowing white form - a contemporary architectural icon disrupting the historic city fabric. Completely uneducated about the project or the architect behind the design - Behnisch Architekten - we ventured inside to explore the aquarium and education center dedicated to the Baltic and North Seas. Despite the elaborate curves that echo of a Frank Gehry design, and my bias against such architecture, the interior was quite enjoyable. 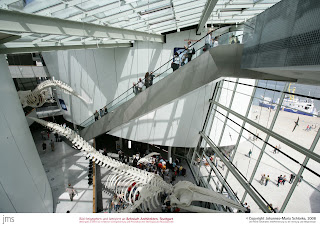 The circulation, moving up and down flying escalators, ramps, bridges and stairs is creative and adventurous - leading to unknown exhibitions and offering unique views down through the atrium and into the city beyond. However, I found the actual exhibition spaces much less successful. With almost no natural light and only small electric lights highlighting individual displays, the interior became a dark unpleasant space - particularly in the first gallery space. The aquarium displays were much more successful, particularly when the twists of the building lead to unexpected windows offering great perspectives down the narrow city streets. Finally the exhibits give way to the climax of the museum, a 3 or 4 story high cylinder with life-size models of whales suspended down the space. Guests are invited to recline on lounges in the bottom and stare up at the animals as a light show and presentation (in German) immerses you in oceanic life. This was actually a great disappointment, other than a chance to sit and relax for a few minutes - the drama of the space was ruined by the fake looking models of whales.

All in all I think it was an interesting building. The atrium was fantastic, circulation was successful and the the twisting form of the facade was a dramatic departure from the historic brick city and evoked images of sails and white tipped waves. However the actual exhibit spaces were a little forced and less effective. Regardless of its downfalls, the building recently won the 2010 European Museum of the Year award. Below is the press release with more information about the project, award and firm. 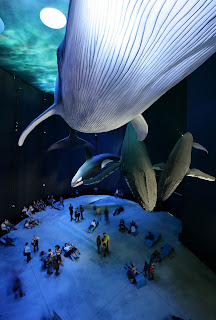 Stralsund, Germany - Ozeaneum, the German Oceanographic Museum, designed by Behnisch Architekten, is the winner of the European Museum of the Year Award for 2010. Opened in 2008, the sleekly modern Ozeaneum sits at a harbor promenade astride the Baltic Sea in the north German port city of Stralsund. A striking new landmark, the museum complex’s white façade, clean and elegant lines, and light-filled atrium contrast, yet complement, the historic warehouses and centuries-old buildings in the surrounding neighborhood.

Ozeaneum was among 22 museums competing for this year’s European Museum of the Year honor, which has been given annually since 1977 by the non-profit European Museum Forum (EMF). EMF Chair Dr. Mikhail Gnedovsky said, “The main award goes to a museum that contributes most directly to attracting and satisfying its visitors with unique atmosphere, imaginative interpretation and presentation, creative approach to education, and social responsibility.” Ozeaneum director, Dr. Harald Benke, accepted the award on May 22nd during EMF’s recent conference in Tampere, Finland.

Previous recipients of this top prize include Guggenheim Museum in Bilbao, Danish National Museum in Copenhagen, and Victoria and Albert Museum in London. Candidates for European Museum of the Year are new museums—established within three years prior to the Awards year—and older museums completely renovated during the same period.

“Creating Ozeaneum was a great challenge — and a great pleasure,” says Stefan Behnisch, Hon. FAIA, BDA, RIBA, principal partner of Behnisch Architekten. "We are delighted that EMF recognized it with this important honor.”

Behnisch Architekten’s design encompasses a special Greenpeace-sponsored display of “Giants of the Sea”, large aquaria, and interactive exhibitions about the Baltic Sea, the world’s oceans, and marine research. The architect’s aim “to echo the rough nature and fluid motion of the sea” is understood viewing Ozeaneum’s exterior — reminiscent of billowed sails in an ocean breeze — flow around the façades of the exhibition and aquarium sections. Fluid and unified, the Behnisch Architekten designed museum complex visually and functionally supports Ozeaneum’s stated intent to be "a declaration of love to the oceans that visualizes a fascinating underwater journey through Northern Seas.”