Here is a press release we just received from OMA: 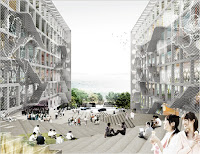 The Office for Metropolitan Architecture in collaboration with Leigh & Orange Architects has won the competition for the new campus for Chu Hai College of Higher Education in the New Territories in Hong Kong. The campus will give Chu Hai College, established in 1947, a new identity as well as a new site. The project, with a gross floor area of 28,000m2, consists of education facilities for three faculties – arts, science and engineering, and business – containing 10 departments and two research centers.

Chu Hai College has traditionally emphasised a multidisciplinary and wide-ranging education for its 4,000 students engaged in the four-year degree curriculum. Accordingly, OMA’s design generates abundant communal spaces that will facilitate encounters between students from different departments.

OMA conceived a building that consists of two parallel horizontal slabs connected by a ‘mat’ of social and educational facilities. The slabs, each eight stories high, contain flexible space for classrooms, studios, and offices. Their aerated structural facades provide a visual unity for the campus, and allow views into the inner workings of the buildings and out over Castle Peak Bay and its verdant surrounding hills. The slabs are oriented to maximise natural ventilation, reducing air conditioning demands by 15–30 per cent and contributing to an efficient, sustainable design.

Connecting the two slabs, the mat contains the library, cafeteria, gym, and lecture theatres. On top of this mat OMA has designed a shaded area of steps, platforms, and ramps that acts as a circulation system between the various facilities. Crucially, this ramp coincides with the slope of the existing hill on the site, grounding the new campus firmly within the landscape.

OMA’s concentrated design for the campus allows several of the original British army buildings on the site to be preserved. These buildings will be used for accommodation, student union and canteen facilities.

The design, led by OMA partner Rem Koolhaas, General Manager of OMA Asia (Hong Kong) David Gianotten, and associate Chris van Duijn, was chosen from eight submissions by internationally renowned architecture offices. The Chu Hai College selection committee chose OMA’s design because it provides a strong visual identity for the college, flexibility in use and an environment conducive for multidisciplinary education. They called the design ‘the bookstand’.

David Gianotten commented: “OMA’s design for the new campus features both pure geometric forms with the two slabs, and subtlety and intricacy with the mat that connects them. We aimed to create a sustainable, integrated, and open platform for the future of Chu Hai College.”

The project will be executed by OMA Asia (Hong Kong), which opened in the summer of 2009. The office is currently also working on a conceptual plan for the West Kowloon Cultural District in Hong Kong, design development of the Taipei Performing Arts Centre in Taiwan, construction of the Shenzhen Stock Exchange, and the interior design of the Edouard Malingue Gallery in Hong Kong.

On OMA:
The Office for Metropolitan Architecture

(OMA) is a leading international partnership practicing contemporary architecture, urbanism and cultural analysis. It is engaged in a large number of projects in Europe, Asia, the Middle East and North America.

recently completed the Prada Transformer, a multi-use rotating pavilion in Seoul, and won two major competitions in Asia for the Taipei Center for Performing Arts and Shenzhen Crystal Island, a cultural and transport hub in the centre of the city. OMA Beijing continues to oversee the construction of the headquarters for China Central Television in Beijing, the office’s largest project to date, and is also developing MahaNakhon, a residential tower in Bangkok, and two innovative residential complexes in Singapore: The Interlace and Scott’s Tower.